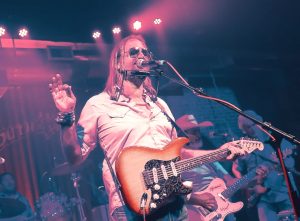 When Texas artist/Nashville songwriter, Cole Degges first came to Music City in 1994 he had no idea he would one day be writing songs for the likes of country music superstars like Kenny Chesney and Tracy Byrd. Currently enjoying the success of the Josh Ward hit "Highway" (which is at #1 on the Texas Charts); Cole also wrote 3 songs for Chris Janson - "Take It To The Bank", "Till A Woman Comes Along", and "Back To Me". Previously he wrote the Gary Allan Gold Record hit, “It Ain't the Whiskey”, Cole has also penned the hits “Cheapest Motel” for Tracy Byrd, “Tattoo Rose” for Andy Griggs, and the trademark Kenny Chesney song “Live Those Songs Again”, which went triple platinum in 2002 giving the Texas native his first taste of major success as a songwriter. The road to the big leagues of country music began in his hometown of Lake Jackson, Texas, where a young Cole was surrounded by music and the infinite countryside of the great state of Texas. Cole's mother played piano in church and the Degges’ home was no stranger to traditional country music, the sounds of Willie Nelson and Merle Haggard burning deep into his psyche at an early age. As a teenager, Cole played music with his brother, Shade, and the two dreamt of the day that they could harness their musical influences and vision. With Cole on vocals and guitar and his brother on bass and vocals, the two played in rock bands throughout high school, living the dream through the music of Led Zeppelin, Lynyrd Skynyrd and Metallica before Cole eventually returned to his country roots. Following a visit to Nashville in 1994 he began classes at a college in San Marcos, Texas only to learn that two of his original songs had been put on hold for recording. "I said, ‘All right, I’ll be there tomorrow.’ I dropped all my classes and left." This became a pivotal moment in his life resulting in the beginning of a career as a major Nashville songwriter and the formation of “Cole Deggs and the Lonesome”, a band of brothers who would soon release their debut album on Columbia Nashville. Songwriting is only one side of the complex artistry of this Texas native, and the roots provided by a musical upbringing combined with his love of life and the outdoors would also give birth to Cole, the world-class performer. Fast forward a decade, several major tours, and several radio hits with other major country artists, and Cole decided to get off the road with the Lonesome. In 2006 he signed a record deal with Sony and embarked on a nationwide radio tour. His single “I Got More” went to number 23 on Billboard. He continued to write for a publishing company and began producing several acts and co-writers, soon discovering that he's as much a producer as he is singer/songwriter. This would lead to the completion of a home studio where he began cutting his own tracks which ultimately allowed Cole to explore a deeper and more intimate side of his song crafting. With his mom being diagnosed with cancer in 2013, Cole temporarily moved back to Texas to help care for her. “During my temporary return I began seeing obvious signs from the Lord that led me to believe I was in the right place, home. After my mom passed, my whole outlook on life and music changed, and my love for singing was renewed.” Presently, Cole is spending time with his wife -Tabitha, bonus daughter, dad, granny and the rest of his family south of Houston on the Coast of Texas where he was raised. He has shows booked through the end of the year and into next year and is about to embark on a radio tour to promote his latest release. “ I’ve always felt home in Texas, whether it’s at my farm in the east Texas pines, or catching speckled trout in the surf 5 minutes from my house. Everywhere I go here, I’m always close to family and friends.”